Quad Bike training for the Army

Training the Army in Quad Bikes at Robertson Barracks

I had a fantastic chance to provide quad bike training to the Army, in Darwin.  I thought to my self, what an opportunity to be able to work with soldiers from the Australian Defence Force, these people use skills and resolve to operate quad bikes in tough conditions. We did the training in March and the days were very wet and the rivers were flooded so we had allot of country that was boggy, wet and roads were flooded. The soldiers had lots of experience and skills so I was really there to pick up on any bad habits and reinforce skills.  We focused on hills as these are the most dangerous and did a variety of different uneven terrain. 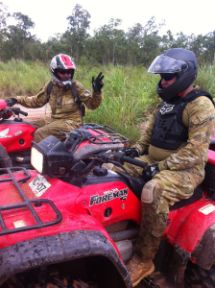 The country was flooded so we had to float the quads across a waterhole, the quad bike has big soft tires that run at 3.6 PSI, this means a big footprint for the weight of the vehicle.  The soft tires allow maximum traction so they are great for mud.  We rode through some black soil and the motorbike got stuck when we hit quicksand, I had never seen anything like it "true quicksand" the quad bikes just sank.  We had to walk and push them out, a good experience.  Want to do a quad bike course

Firstly, let’s look at the statistics for quad bikes, they are pretty bad, in fact quad bikes are the biggest killers on farms. 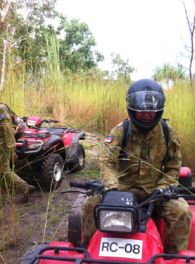